Psoriasis is a common non-contagious skin condition that triggers the occurrence of scaly patches and redness on the skin, particularly on the scalp, knees, trunk, and elbow. Unfortunately, Psoriasis is not curable, and it’s a chronic illness. It’s usually active for a period (ranging from a few weeks to a few months) before going into remission or temporarily subsiding.

Though Psoriasis cannot be cured, there are available medications to help you manage the disease. You can also integrate certain habits or coping mechanisms into your lifestyle to help you live well despite having Psoriasis.

Psoriasis is regarded as an immune system problem. This is because the skin regenerates faster than it’s supposed to. Plaque Psoriasis, the most popular type of Psoriasis, causes skin cells to regenerate so fast that it triggers red patches and scales. The exact reason the immune system malfunctions isn’t known yet, but experts assert that environmental factors and genetics are part of it.

People inclined to have Psoriasis may not manifest any of its symptoms for years until an environmental factor activates the disease. Some of the common causes of this skin condition include:
Skin infection
Strep throat infection
Stress
Cold, dry weather conditions
Smoking or being exposed to smoke from cigarettes and tobacco
Skin injury (scrape, cut, aggressive sunburn, or insect bite)
Quick withdrawal of systemic or oral corticosteroids
Usage of medications meant for treating high blood pressure and malaria
Excessive intake of alcohol

There are many types of Psoriasis, including:

This is the most common form of Psoriasis. It triggers the occurrence of skin lesions with silver-coloured scales called plaques. They may be tender and itchy. They can also be numerous or few on your skin. They mainly occur on the scalp, knees, elbows, and lower back.

This type of Psoriasis is more common among children and young adults. It’s caused by strep throat, which is a bacterial infection. It appears as tiny scaling lesions in the shape of droplets on the skin. It usually appears on your arms, trunk, or legs.

This type of Psoriasis is exclusive to your toenails and fingernails. It causes discoloration, abnormal growth, and pitting of your nails. In some cases, the nails can crumble. Nail Psoriasis can also cause your nails to get loose and detach from the nail bed.

This is a rare type of Psoriasis. It’s marked by sizeable lesions filled with pus or fluid. They appear in broad patches all over the affected parts. They can also appear in smaller patches on the soles of the feet or the palm of hands.

Fungal infections cause this form of Psoriasis. It commonly appears on the folding skin of the breasts, buttocks, or pubic areas. This type of Psoriasis triggers the occurrence of smooth red patches on your skin that deteriorates with sweating and friction.

This is the rarest and most severe form of Psoriasis. Unlike other forms of Psoriasis, it appears all over your body as red, peeling rashes that can burn or itch severely.

This type of Psoriasis causes your joints to swell and be painful. At times, this joint pain is either the first or only indication of Psoriasis. There are also times that the only symptom is toenail or fingernail changes. The symptoms can be moderate or light, and they can also be severe.

This form of Psoriasis can occur at any joint. When this happens, it can trigger stiffness and continuous joint damage. In extreme cases, this can even result in permanent damage to the joints.

Erythrodermic Psoriasis is so rare that it occurs in about 3 of 100 Psoriasis cases. It triggers most of your entire skin to develop red rashes and causes the body to shed itself in sheets. Some of its common symptoms include enhanced heart rate and shivering. This form of Psoriasis is dangerous because it can cause complications such as congestive heart failure or pneumonia when not treated.

Pustular Psoriasis is another rare form of Psoriasis with common symptoms including dehydration, mysterious weight loss, weak muscles, racing pulse, and fever. People who have Pustular Psoriasis may require hospitalization to regulate the body’s temperature and rehydrate.

If you experience any of the symptoms of the above forms of Psoriasis, ensure you contact your doctor as soon as you can. 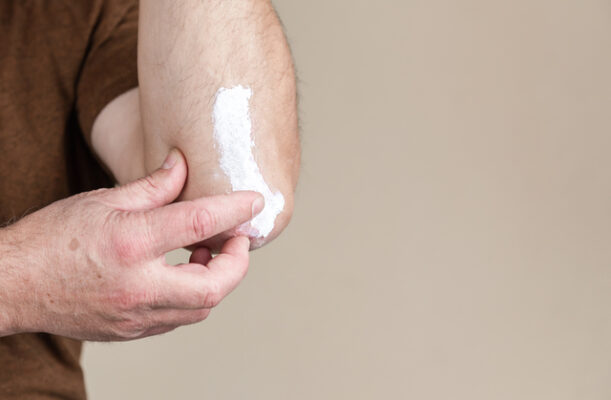 As mentioned earlier, this skin disease has no cure, but it can be managed. Here are just a few of the many products available on ZipRX to effectively treat and manage Psoriasis:

This topical medication contains adapalene. It’s available in gel (for the skin) and lotion (for the face) form. It should be applied to the affected area(s) once a day and before sleeping. For the gel, you need to apply a thin layer. For the lotion, squeeze three or four times to cover the face fully. Commonly experienced side effects include Xeroderma, redness, and exfoliation.

This medication is specifically meant for treating Plaque Psoriasis. It’s not suitable for pregnant women or nursing mothers. It should be applied gently on the affected part(s) once daily. After application, ensure you cleanse your hands thoroughly. Some of the side effects include rashes, stinging, burning, and site scaling.

This oral medication is an immunosuppressant. It should be taken as prescribed or recommended by the doctor. The side effects of this medication are extensive. It shouldn’t be used by individuals who are hypersensitive to tacrolimus.

Psoriasis is more than a skin disease. It’s capable of affecting your entire body system and causing severe and, in some cases, terminal complications. Ensure your treatment plan includes eating healthy, maintaining a healthy weight, and periodic screenings for diabetes and cardiovascular diseases. Lastly, ensure you’re aware of the pros and cons of every medicine before you use them.